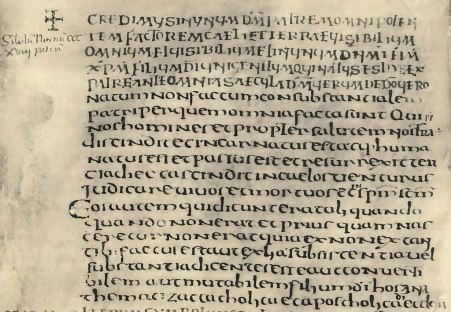 The AbbeyChurch see ourselves as part of the creedal church tradition.

As such, we are Trinitarian Christians who proclaim Jesus as Lord - "crucified and risen - our judge and our hope" (A New Creed, The United Church of Canada)!  This proclaimation is not merely theoretical or symbolic, but has deep implications for our lives, our communities - and, indeed, for the life of the world.

Some faith communities will create a long laundry list of beliefs to set a person on the 'inside' or the 'outside'. We take the approach of leaning into the holy story found in the creeds as our most basic, ancient and sacred truth.

This is a story of God's yearning love made known in the incarnation, life, death and resurrection of Jesus Christ.  It is a story of creation and and of our hope for the renewal of all things.

It's a story that we take seriously and urgently believe that we need as humanity and as a planet.

These are the essentials, the rest, as they say, is commentary.

To sing or chant or say the creeds is to participate in a radical, communal, countercultural act of trust in Someone - and in a sacred story that is bigger than ourselves.

When we say 'I believe' - which is an intellectual proposition - we are really striving to say 'I trust' which is perhaps something deeper and even different than intellectual assent...

No matter how some of us might intellectually struggle with some of their precepts, the creeds give us something - a Big Story, a grand narrative  - to bounce against, pray through - and to wrestle with together.

In our Sunday worship, which is ecumenical, we often affirm our ancient faith with several different creeds, including variations of the very ancient Apostles’ Creed - which dates from at least the 4th century - and possibly much earlier - as well as the more recent New Creed, which was first drafted by the United Church of Canada in 1968.

Here are these two creeds which, in differing ways, tell the cosmic 'story' of our ancient faith in the Triune God and God's love for us:

I believe in God,
the *Father Almighty,
creator of heaven and earth.

I believe in Jesus Christ, God’s only Son, our Lord.
He was conceived by the power of the Holy Spirit
and born of the Virgin Mary.
He suffered under Pontius Pilate,
was crucified, died, and was buried.
He descended to the dead.
On the third day He rose again.
He ascended into heaven,
and is seated at the right hand of the *Father.
He will come again
to judge the living and the dead.

I believe in the Holy Spirit,
the holy catholic Church,
the communion of saints,
the forgiveness of sins,
the resurrection of the body,
and the life everlasting. Amen.

* With the understanding that God is neither male nor female, some may wish to interpret "Father" as "Loving, strong Parent".

We are not alone, we live in God's world.
We believe in God:
who has created and is creating,
who has come in Jesus,
the Word made flesh,
to reconcile and make new,
who works in us and others by the Spirit.
We trust in God.
We are called to be the Church:
to celebrate God's presence,
to live with respect in Creation,
to love and serve others,
to seek justice and resist evil,
to proclaim Jesus,
Crucified and Risen, our judge and our hope.

In life, in death, in life beyond death,
God is with us.
We are not alone.

Thanks be to God.

One further note: In the words of Michael Ramsay, “the [creeds]... emerge in the life of the Church as sign-posts of the historic events and to the general experience of Christians as against speculative tendencies which would ignore both.”

It's important to note that "the Creeds are not in themselves the Christian Faith; Christians do not ‘believe in the Creeds,’ but, with the Creeds to help them, they believe in God.” (Michael Ramsay) and “...the Church adheres to the Creeds not with a view to foreclosing thought and inquiry, but because Creeds point away from the dogmatisms of each modern age in its turn to the freedom of the Gospel of God.” (Michael Ramsay).